For this review we take on two double IPAs that are super fresh, released to markets the same week. With similar IBUs, we were inspired to compare the two Midwestern breweries efforts in this category. And so, we bring you our DIPA Batttle: Fat Head’s Hop Juju versus Dark Horse Double Crooked Tree. Double IPAs are a hugely hopped-up style, with an alcohol content often approaching a barley wine. From the Oxford Companion to Beer:

Based on the original India pale ale (IPA) style that was revived by the American craft brewing movement in the 1980’s, the newly minted ‘double IPA” (also known as “imperial IPA”) seeks to take both alcoholic strength and hop intensity to new levels.

In late February two double IPAs appeared in our local beer stores simultaneously. One is a newcomer to stores, the first bottling of Fat Head’s Hop Juju. Regarded by locals as a world-class DIPA, as exceptional a double as Headhunter is a traditional IPA. Hype was palpable. The second beer is old-school as far as the imperial IPA scene goes. Having been released in 2005 as a hop bomb with 98 IBUs and a massive ABV of 12%, it represents all the brashness and swagger of the team at Dark Horse.

So how did the two hoppy beers compare, and which one won the battle?

First up was the paler of the two,  a semi-translucent— wouldn’t call it cloudy— copper pour with thick white head. As the original Batman show would say: BAM! KAPOW! BOINK! This beer has a massive piney hop nose with undercurrents of citrus, plants and a hint of malt. The taste is even bigger, with a huge grapefruit/citrus element, balanced somewhat by a cracker malt flavor. The body is medium with solid carbonation. Finish comes in with big bitterness, even more hops, and a dryness.

What a beer! Hop lovers are always told that every double IPA with  major bitterness is right up their alley. In this case, Fat Heads delivers the goods with an amazing beer from hop crazy nose to thirst inspiring dry finish.  A 2013 Great American Beer Festival gold medal winner, Hop Juju shows what a world class double IPA can be. 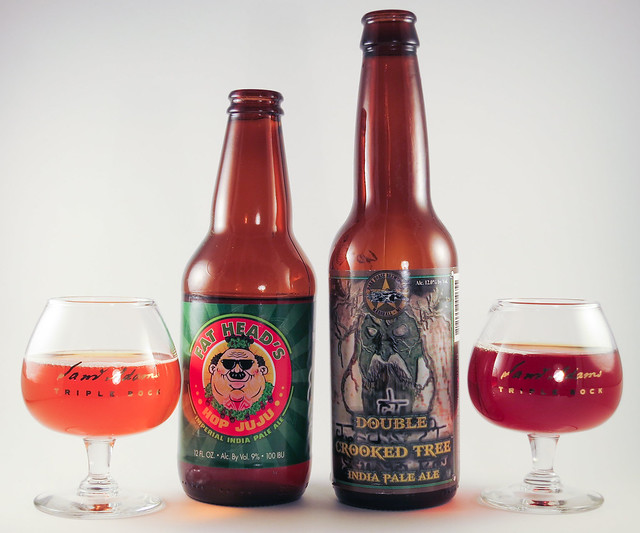 The team up at Dark Horse are known for taking chances on beer. For their imperial IPA, they went literal in this persuit, doubling the malt bill and hops, while keeping the water at the same level. From this description we might expect a near barley wine level of malts. With 98 IBUs and an ABV of 12% this thug is bringing all his swag to the party.

Pour is ruddy orange/copper with some haze. The head is thin, khaki-orange, and dissipates quickly. The nose is caramel malt with medicinal phenols and a distinct scent of booze. The body is medium, feeling heavier due to the weak carbonation. Tasting this thing is much like the smell: caramel malts, a plant-like note, bitterness from the hops, and alcohol. Double Crooked Tree is very sweet, reminding one more of an American barley wine than an IPA. Finish is bitter and booze-forward.

In this battle, I expected to huge delicious imperial IPAs. The results proved us half right. Dark Horse brought a malt loaded booze bomb, that seemed designed to cover up the hoppy high IBUs. The new Fat Head’s beer was closer to what was hoped for, a beer striving for the superlative heights of double IPAs. Superbly flavorful, but actually achieving a good balance between the juicy citrus hops and malts.

The winner then, is Fat Head’s Hop Juju by knockout in the first round. Even if older double IPAs left too bitter or malty a taste in your mouth, this one will not disappoint.